MelloDia is the highly sought after 2008 Leopard 46 owners version. Designed by Morrelli & Melvin and built in South Africa by Robertson and Caine the Leopard 46 has become widely recognized as one of the most successful examples of a blue water cruising catamaran, providing a spectacular merger between comfort and reliability.
MelloDia has been lovingly maintained by the current live aboard owners and boasts a plethora of features and upgrades which include: 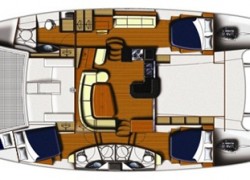