Just Catamarans is excited to announce the sale of a Catana 431 Catamaran built in 2002. Just Catamarans broker Robert Taylor represented the Seller in the deal.

TONIC, designed by C. Barreau, is a Catana 431, hull number 41, built in 2002. Her first owner kept her in the Mediterranean and North Africa, and she came across the Atlantic in 2012. The current owner bought her in 2013 and has sailed her between his home in Virginia and the Lesser Antilles many times.
She is a performance catamaran, of 43.0′ LOA, with twin daggerboards and a shoal draft of 2′ 7″. With the boards down she draws 7′ 3″. Her beam is listed as 24′. Her listed dry weight is 16,755 lb.

She was constructed using light-weight materials including Twaran/Kevlar cloth at high-impact areas, and foam coring. She uses vinylester resin so there is no possibility of osmosis or gelcoat blistering.

The interior finishings are also of foam core, with wood veneer, for strength and lightness. The cabin soles are cored also, with synthetic teak veneer.

TONIC is laid out in the Owner’s Version with the starboard hull for the owner. It has a large head area with walk-in shower area, washer/dryer and food storage area, a chest of drawers, a seat, and a hanging locker outside of the cabin itself. A panel swings out to give privacy to the hull occupants from the central salon.
The port hull is laid out with two double cabins, although the aft cabin can be converted into two singles. There is also a head with shower. Both the port forward cabin and the shower area in the starboard hull have opening ports in the hulls so that air can circulate while at anchor, with no danger of rain entering. There are no overhead opening ports that must be closed to prevent rain from entering the cabins.
The mattresses on all berths are supported by lattice wooden frames that allow circulation of air and prevent moisture from accumulating, keeping the berths dry and cool. There is considerable storage beneath all the berths in the boat. Also under the aft berths are the water-heater storage tanks.
The salon seats eight, and has a pedestal table that folds out for all to dine, but folds up for more space and access to the settee. Drawers for cutlery and glasses are located in the pedestal. The six house batteries and additional storage space are located under the settee. There is LED lighting throughout the boat.
Pressurized hot and cold water in gally sink, and in sinks and showers in both heads, plus shower on stern. Two separate freshwater pumps.
In total, there are 12 opening hatches or windows for light and ventilation throughout the boat. Windows in the accommodation have insect screens and blackout covers. 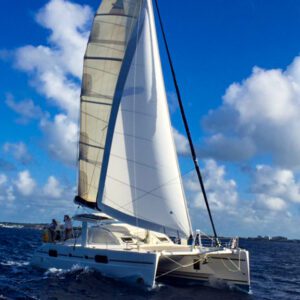 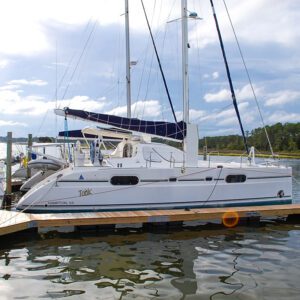 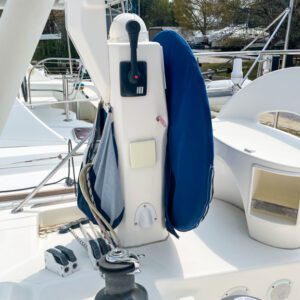 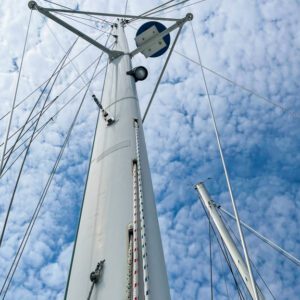 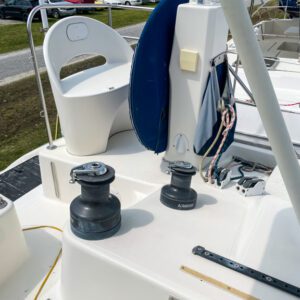 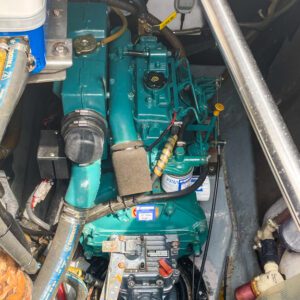 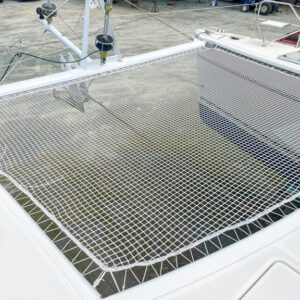 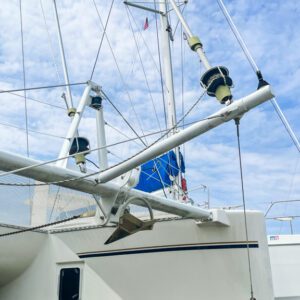 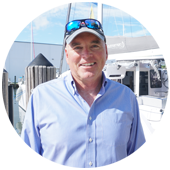 SELL YOUR CATAMARAN WITH JUST CATAMARANS