There was a funny old saying that used to go around when I was in the windsurfing business, which was that New England is where fashion goes to die. While that may or may not be true in regard to board shorts and flip-flops, it is interesting to note that Catamarans (and trimarans too) have been very slow in taking over the New England sailing landscape.

In every other sailing Mecca, multihulls dominate. In the relative blue blood sailing bastions of Newport, Marblehead and the like, old-timers have often concluded that catamarans really aren’t sailing vessels at all!

It should be noted that many of those same esteemed yachtsmen steal away to the BVI with large groups for a winter soiree aboard a “condo cat” as they like to call them, yet invariably they return to parts north singing the praises of a good Downeast monohull sailboat, while casting disparaging glances down their Maui Jims at any twin-hulled interlopers in our waters.

New England has been the home of some of the great minds in naval yachting history, and interestingly that does include a place in the history of the cruising and racing multihull as well. Let’s start with Nathanial Herreshoff. As anyone who has visited the Herreshoff Museum in Bristol RI knows, old Nat came up with a racing cat a long time before any of this was salient. Amaryllis was a smoking little cat in the late 1800’s, and was widely reviled by the Newport purists as unfair. There it was, and it stands in historical significance. Amaryllis was the fastest thing on the water, in New England, and a long long time ago. Still, it has taken hundreds of years for that eruption to be felt. 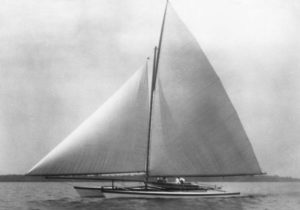 Dick Newick began designing racing trimarans in the 1960’s. His place in multihull history is well documented too. Newick trimarans are still around, still sailing, and still fast. Walter Green in Maine was on this early with his southern Maine boatyard specializing in multihulls, as well, and his yard is still there to this day. 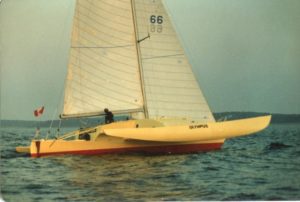 In modern times, two very significant New England personalities have affected the catamaran landscape profoundly. Chris White, whose succession of performance-oriented cruising cats and trimarans has a cult-like following redefined true performance cats with reasonable accommodation. Then there is my old friend Peter Johnstone, whose innovations with his seminal brand Gunboat, has defined the development of the true high-performance luxury cat. That is not to dismiss Catana, Outremer, and a number of great European performance cats, but truly Gunboat set a standard, and that standard is deeply rooted in New England. There are a lot of Gunboats sailing our waters now, and anyone from Eastport to Westport knows these yachts are special and have opened up the minds of people as high up as the commodore of the New York Yacht Club. Every year, there are more and more catamarans sporting daggerboards gracing our harbors and that trend is growing quickly. 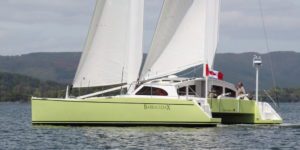 As we go forward now, each year we see all types of cats in abundance here. There are plenty of vacation oriented cats in our summer waters too. The same things that make a cat great in the BVI make a cat great in New England: stability, quality of life aboard, space, comfort, and luxury. There will be lots of Lagoons, and Leopards, and Fountaine Pajots here this summer.

Going fast or sailing all points of sail is not important for everyone, and there are so many other great things about cruising cats that even stodgy old New Englanders are starting to see. Yet, more than any other market in the US, New England is a place where you’ll see Gunboats, and Chris White boats, and H&H’s, and Outremers, and Catanas.

There are more brands entering this segment of the market all the time, and New England is likely to disproportionately support performance cats more than luxury cats. It’s a new dawn, but no longer is it unusual to see cruising cats in New England harbors. With that, expect to see more and more gorgeous, fast, and blue water capable entries.

So while we might never see more luxury cats than Downeast monohulls in these waters, we are certainly seeing the growth of the best and most innovative performance cruising cats right here. 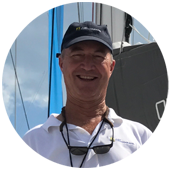